Web tablets: When will ViewSonic jump in? 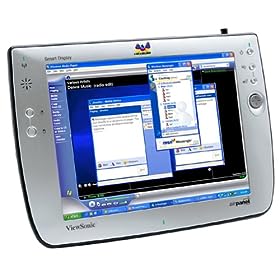 I welcome a tweeting representative at ViewSonic Corp. as one my most recent Twitter followers; I am following him or her as well.. ViewSonic has always been a progressive display company, which I suppose it has had to be as one of the few independent brands in the PC monitor marketplace. Seeing ViewSonic in my followers’ list got me thinking about the company’s various forays to market intelligent displays.

Still, I liked the Smart Display concept. If netbooks indicate that price was the main obstacle presenting consumers from buying ultraportables with 11” and smaller screens, perhaps a lower-cost tablet could vindicate the Smart Display form factor (if not its design goals). Certainly that’s what the CrunchPad is setting out to do. In any case, VviewSonic was the leading brand in the doomed category, offering AirPanel Smart Displays in both 10” (pictured) and 15” screen sizes with a USB keyboard.

More recently at this year’s CES, ViewSonic jumped on the netbook/nettop bandwagon, showing a number of PCs such as a backpack PC intended to affix to the back of a monitor, an all-in-one, and a netbook. The challenge, though, is that while the netbook market has raised Asus’ profile, consumers are increasingly thinking about netbooks as little Windows PCs, and in turn are looking to big Windows PC brands, On the other hand, maybe a big “PC” brand like Apple can open up the tablet category.

I don’t know if ViewSonic has it in them, so to speak, but if Archos as well as the CrunchPad and Touch Book teams were able to do it, I’m sure ViewSonic could as well. Maybe it could embed Android (which would probably be the way to go despite large-screen Android misgivings), or one of the “instant on” operating systems such as SplashTop or HyperSpace. In any case, ad at the risk of damning it with faint praise, the Web tablet is probably the best opportunity since Smart Display for a monitor manufacturer to really differentiate itself technologically.